The tradition of British kings and queens having two birthdays dates back more than 250 years, to the reign of King George II in 1748.

Although born in April, Queen Elizabeth II will celebrate her “second” birthday this Saturday, with an event that is one of the most elaborate and opulent ceremonies of the royal calendar: Trooping the Colour.

The Queen has taken the salute at every parade since her accession to the throne 62 years ago.

How can you watch the ceremony?

The ceremony can head down to The Mall, where you may be able to catch a glimpse of members of the Royal Family as they go past. Alternatively, camp out at the edge of St James’s Park to see the troops on Horse Guards Parade. The Culture Trip recommends arriving at either of those two locations by 9am at the latest in order to claim a spot.

If you can’t wrangle a decent viewpoint for the ceremony, the Red Arrows fly-past is visible from across most of central London, so be sure you’re in the area. 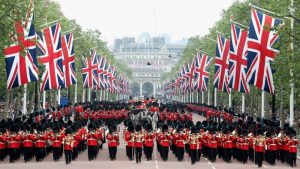