Childcare International is delighted to announce that Sandra Landau, their Director and the co-founder and former chairperson of BAPAA , has been appointed a Member of the Order of the British Empire (MBE) in the New Year 2017 Honours List for services to au pair cultural exchange programmes. This adds to our celebration of having been in business for 30 years.

The award recognises more than 20 years of voluntary service by Ms Landau, dedicated to establishing and promoting high professional standards for the unregulated au pair industry, as well as representing the industry at international and government levels and supporting its global cultural exchange programmes for young people.

Sandra Landau MBE, of Edgware, Middlesex, has been part of the au pair industry since 1986. In 1994 she became a founder member of the International Au Pair Association (IAPA) and was then a member of its executive board for many years. She was the catalyst for the formation of BAPAA in 2003 and served as its chairperson until 2015, remaining on the board as its treasurer. In 2006 she was also the main instigator in setting up the European Committee for Au Pair Standards (ECAPS). None of these roles was a paid position.

Her successor as BAPAA chairperson, Rebecca Haworth-Wood, said: “The quality of the au pair and family relationship is of prime importance. Sandra’s contribution to the BAPAA code of conduct and guidelines which professionalise the au pair industry, providing safeguards for au pairs and their host families, cannot be overstated.

“For 20 years she has been a driving force, in an unregulated industry, in agreeing and promoting high professional standards and a code of conduct that nowadays offers confidence and security for young au pairs venturing abroad and for the host families receiving them. For even longer she has been encouraging agencies to set best practice for themselves.”

“She has frequently represented the industry internationally and in talks and agreements with governments and has worked tirelessly to promote high global standards for young people’s cultural exchange.”

Sandra Landau MBE said: “I am overjoyed to accept the honour of this MBE and owe a debt of gratitude to the BAPAA board members and others who have helped with this work, both within the industry and with government. I’m very grateful that the professionalism of our industry should be recognised like this.”

Working with other BAPAA board members, Ms Landau has liaised with government departments on many issues including visas, points-based immigration, the Vetting and Barring scheme and the National Minimum Wage. With the Department of Business, Innovation and Skills (BIS) she assisted in providing a much-needed definition of an au pair and she continues to advise on the possible impact of Brexit on the various programmes.

Ms Landau is the author of the Au Pair Handbook, which is widely used by all BAPAA member agencies to help understanding between newly arrived au pairs and their host families. She is also owner and director of one of the of the largest BAPAA au pair agencies in the UK.

The staff here at Childcare International are heaving with pride, and are so happy to be part of this fantastic company and have such a lovely and reputable boss! 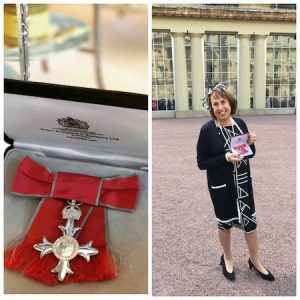